Skip to content
TEL (+34) 93 514 39 97   (+34) 675 58 14 62
Between 2015 and 2016, the number of deaths due to traffic accidents in Spain increased by 7%. Of the victims of road accidents in 2016, 589 were under the influence of either drugs or alcohol when they were behind the wheel, with more cases involving alcohol than drugs.
The Instituto de Medicina Legal y Ciencias Forenses (The Institute of Legal Medicine and Forensic Science) carries out an annual assesment of traffic accidents within Spain. They look at the use of alcohol and drugs in relation to these accidents. Spanish Law states that it is illegal to drive under the influence of either substance. The exact amount of alochol which a driver can have in their blood is equal to 1.2 grams per litre and in a driver’s breath there must be no more than 0.6 milligrams of alcohol, according to the Ley Orgánica 10/1995. The penalty for driving under the influence of a larger quantity is a prison sentence between 3 and 6 months, or with a sentence btween 6 and 12 months. It is also possible that you may have to carry out community service of between 31 and 90 days. In any case, a sentenced driver will have their licence revoked. The driver will be prohibited from driving cars, motorcycles and mopeds for as long as four years.

It is essential that the law regarding drink-driving is strict in Spain, as it is clear from the research carried out by the Institute of Legal Medicine and Forensic Science that there are still problems with the number of drink drivers. The number of victims due to drink driving increased between 2015 and 2016, by 7%. Not only are drunk drivers a danger to other cars on the road, but they also put the safety and lives of pedestrians at risk.
Some drivers consider their best solution to be to refuse to take the test requested by Police to check alcohol levels in the blood. It is important to rememeber that this is not a solution, as the punishment for test refusal is a prison sentence of between 6 months and a year. A driver doing so will be banned from driving motor vehicles and mopeds for between one and 4 years. Therefore, drivers refusing to take this test will most likely receive a longer sentence!
Not only will a person caught drink driving face a prison sentence, but they will also have to pay administrative fines for driving under the influence of alcohol. Some drivers try to trick the law when they have their licence revoked. An example is a man who, after having his licence revoked, continued to drive. His attempt involved the use of a driving licence which he obtained in Portugal. It is important to remember that there are no legal grounds which permit a driver to have driving licences for two member states, when one has been revoked due to illegal driving or points on a licence. There are also criminal punishments for this.
According to the RACC’s recent survey, a man can drink 4 glasses of beer, 3.8 glasses of wine and 4.7 shots of spirits without getting a positive test result. In the case of women, these figures will be up to half the amount for each type of alcohol. The table below gives an idea of the quantities of alcohol in each drink, however it is important to remember that the effects on each individual will vary. 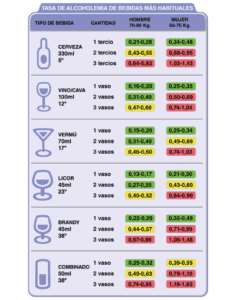 Table published to highlight the quantities of alcohol often found in each drink (subject to variation).

In any case, our lawyers seek to dissuade all drivers from doing so under the influence of alcohol. It is not worth the risk of punshment and fines, and most importantly, it is not worth the risk to the safety to the people in the vehicle, other vehicles on the road and also to pedestrians.
DGT warns you that the amount permitted is not as easy as counting the number of glasses which you consume. It also depends on other factors, which include gender; weight and the consumption of food. It is important to avoid driving after the influence of alcohol throughout the year, however there are often more drink driving cases during the Christmas holidays. It is not acceptable to put lives at risk at any time of the year!
The guardia civil has published the table here to highlight the quantities of alcohol which a person can consume, expressed in grams/litre.
Do you want some more information? You should read the following links:
Click on:  Driving whilst intoxicated
Click on: Driving with excessive speed
Should you need further information, or legal advice, please do not hesitate to contact our lawyers. You can contact us by using the contact form below, by emailing info@pineradelolmo.com, or by telephoning +34 93 514 39 97 .
Disclaimer: This information in this article is not definitive, for up to date legal advice which is relevant for your case please contact us.
Tags: accident, alcohol, breathalyser, car, dangers, drink, drink driving, driving, quantity

What do I do if my tenant refuses to pay rent?